Tradition in Translation: Two Contemporary Artists and the Virgin Mary 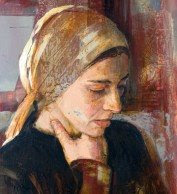 In the contemporary art world there are few examples of religious imagery other than the ironic, satirical, or that which is laden with ambiguity. The postmodern atmosphere is usually styled as “anything goes” in the arts, but, ironically, sincerely “meant” sacred art is taboo. At best such art would be thought antiquated or anomalous. Yet into this situation Tanja Butler and Bruce Herman — two painters in the Christian sacred art tradition— bring their art as an unashamed participation in both the contemporary art “tradition” and a robust, newly recovered sense of visual meaning in sacred imagery.

Imagine painting images of the Virgin Mary — the figure in the recent Western tradition most associated with sentimentality and religious “kitsch” — all the while presenting this work as serious contemporary art. This is the surprising element in both these artists, whose work on the life cycle and story of the Virgin Mary is on view at the Barrington Center for the Arts at Gordon College in Wenham , Massachusetts , Nov. 22 – Dec. 18.

Before he began exploring the Marian theme in his work, Herman says, he had “almost always found the images of Mary to be sentimental to a point of making me turn away. Most churchy art has that effect on me, except perhaps the crucifixes. But even those images have become decorations, something to hang on a gold necklace.” His hope, in completing this series, which will tour this country before being installed permanently in a convent in Orvieto, Italy, is that the paintings will be “answerable not just to my own generation, but to those in the past who counted these stories dear.” 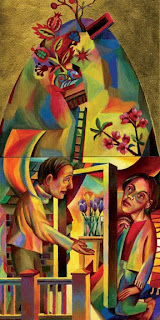 Butler ’s new body of work explores the place of Mary in Christian theology and devotional practices. Art historian Rachel Hostetter Smith says, of Butler ’s new paintings: “These small, intimate works project the lucid innocence of the ideal of a pure child-like faith that is nevertheless undergirded with a profound theological sensibility.

Prismatic facets of light and vibrant color combined with folk motifs are informed by a rich iconographical tradition embedded with intricate symbolism. The bits of lace and fabric, beads, and other small objects bridge the fictive space of painted image and material reality to remind us that faith transcends the limits of our understanding and reach. They reveal and conceal the intersections of human experience and divine truth as objects of contemplation that can become vehicles of grace.”

Interview with Herman in The Boston Pilot

###
Thanks to Gordon College for sending this press release.
Posted by Fred at 11:29

At the Origin of the Christian Claim

The Risk of Education: Discovering Our Ultimate Destiny

The Journey to Truth Is an Experience

Is It Possible to Live This Way?: An Unusual Approach to Christian Existence: Faith

Communion and Liberation: A Movement in the Church

A Generative Thought: An Introduction to the Works of Luigi Giussani

Together on the Road: A Vision of Lived Communion for the Church and the Priesthood

God at the Ritz: Attraction to Infinity

Jesus of Israel: Finding Christ in the Old Testament